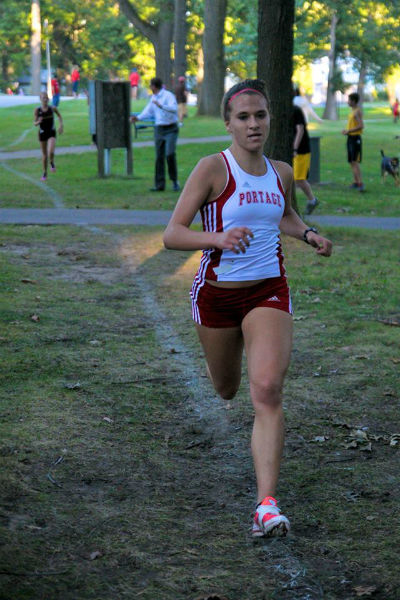 After helping lead her team to cross country state finals last week, senior Paige Pizer has shown she knows what it takes to be a Portage Life in the Spotlight.

Pizer has been a Varsity cross country captain for two years and is the second girl in Portage history to make it to state finals all four years of her high school career.  Although she ran very well as a freshman, she feels that her senior year was her best year.

“Personally I think this year was better because I improved.  Not times or anything, because I didn’t get the [personal record] I wanted, but as a captain I learned from what I did last year, what I could do this year.  I just felt like it was a better year for me,” Pizer said.

In her position as captain, she learned that it is important to work hard and cheer on her team.

“You just have to know your team, really, and how everyone works,” Pizer said.  “You have to look at the bright side and be serious, too.  It’s kind of difficult in my opinion.”

Pizer found that this year’s Portage Varsity Girls’ Cross Country team acted like a true group of sisters.  They were constantly together both on and off the race courses, enabling them to encourage each other to make the best decisions in every aspect of their lives.

“We actually call ourselves sisters and if we do have little conflicts, we end them that day,” Pizer said.

When they ran, Pizer and a few of her teammates would run in a group so that they could all support each other.  Their group became known throughout the schools, and they earned the nickname of Portage Pack.

“Through postseason, we were all together and then when one started to fall off we would cheer them on to come run with us again,” Pizer explained.

Through their hard work, the team finally made it to state.  With that came the excitement of a Portage tradition: adding on to the “shoe tree.”

When Pizer was a freshman, that year’s cross country team took their old running shoes and wrote the year, teammates’ names and memories on the sides.  Then, they tied each pair of shoes together and threw them onto a tree down at state.

What started with Portage, however, has now spread around to many others attending cross country state finals.

“This year, there was so many people that added on to it.  We made it, so we thought it was awesome that other people were throwing their shoes.  When we were there, we were so protective like, ‘Oh, do you like our tree? We made it,’” Pizer laughed.

At the same time, Pizer knew that her team should be proud of all the additional shoes.

“I was thinking about it the other day, that it’s good because [all these] people put in the work and the miles to get to state.  They threw all their shoes up there because they saw what we did and what we started,” Pizer said.

After the positive finish to her high school years in cross country, Pizer will continue running for Portage during the spring track season.