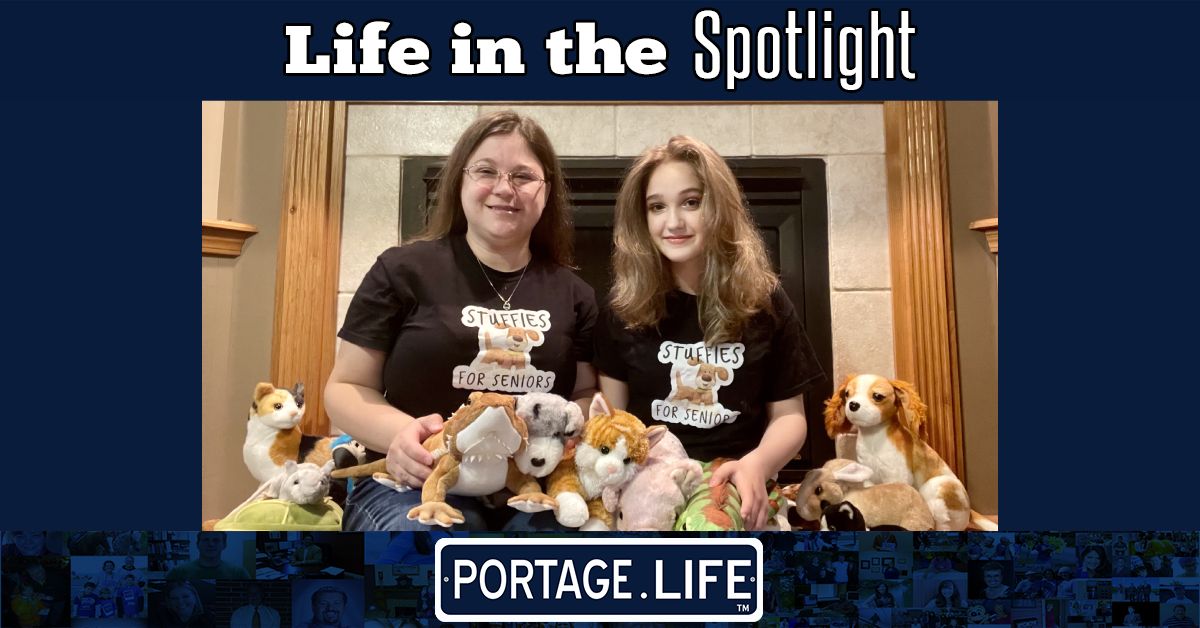 Stuffies for Seniors had its first event back in April when Residences at Coffee Creek in Chesterton held a Pet-A-Palooza and invited Kris McKim and her daughter, Katy, to join.

The idea to start this organization originated when McKim and her daughter were at the mall, but McKim’s grandmother was the inspiration: her grandmother was in the memory care unit at a nursing home.

By the end of the night her and her business partner Jenn Weeks, a volunteer for Lakeshore PAWS, started a Facebook page and asked for donations.

“After having a loved one in a nursing home, I know that it's not a cheap endeavor to have to put someone in a facility like that,” McKim said. “This is our way to be able to give back to those families that have to make that decision for their loved one.”

Every few days, McKim shares an Amazon wish list and shows pictures of the stuffed animals as they come in. Within six weeks of starting her business, she had about 80 animals.

Spreading joy was what McKim had in mind when she went about this organization. The pandemic heavily affected the outcome of it as it encouraged her to go through with it.

McKim has heard of studies showing it is beneficial for memory care patients to have something to take care of, specifically women as the majority of them were homemakers growing up, because it gives them something to do and makes them feel useful. Her grandmother is an example of that as she did not have a job and took care of her family.

“We noticed a couple seniors spending time with other animals. They would just pick up the animals and hold them and put them back on the table and then swap out kind of like they were spending time with animals actually at an actual rescue,” said McKim.

A lot of the seniors found their look-alike pet through the stuffed animals. The seniors would tell McKim and her daughter their childhood stories about a pet that looked like the one they grabbed or were able to name it the same name.

“There was this one lady who picked a cat because she was never able to have a cat before,” McKim said. “We encountered one woman whose granddaughter showed pigs and so she was able to adopt a pig.”

Her daughter, Katy, was a big help in getting her organization started as she contributed to picking out the animals that would be added to the Amazon wish list and was the photographer for the event.

When McKim isn't organizing a business, she is a medical technologist at University of Chicago. She has a degree in laboratory science and works in the anatomical pathology department. Her department handles and processes biopsies, surgeries, hysterectomies, or mammograms then determines what the health issue is.

Anytime McKim has downtime, you can find her sitting in her craft room. Back in March 2020 when the wave of the pandemic started, McKim was making her own masks for herself, loved ones and her coworkers at the hospital. Her two worlds collided when she made her own “Stuffies for Seniors” T-shirt in her craft room.

Disney is another long-time love for McKim, so she dedicated her craft room into being a Disney theme room. She loves collecting, listening to, and watching Disney.

After her first event, McKim realized this really was something she wanted to pursue. McKim’s goal is to try to do one event a month. She wants exposure and would like everyone to know that there are programs out there available.

“After our first event was all done and we kind of had time to sit and reflect on what was said and what happened, it was nice to be able to hear what everyone experienced and got to see,” McKim said.

For more information on how to help with Stuffies for Seniors, you can check out her Facebook and click on the “shop now” button to view her Amazon wish list.