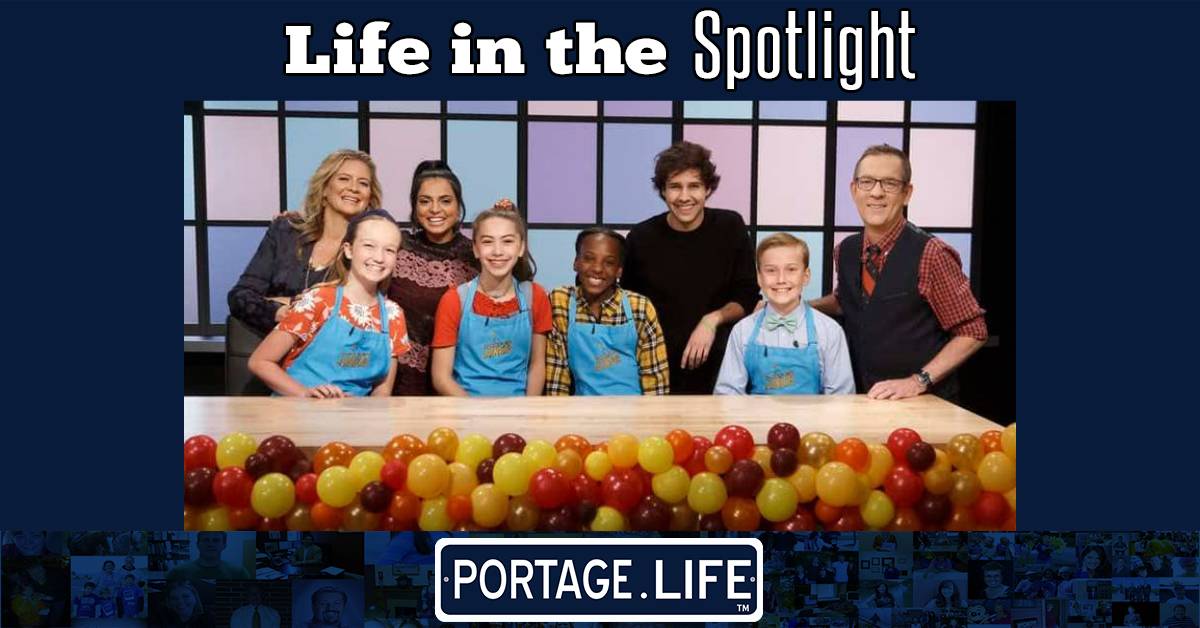 The hit TV show “Chopped” and its sister kid friendly version “Chopped Junior” are two Region favorites, probably in part because  11--year-old Portage native Justice Irving has taken “Chopped Junior” by storm. Appearing on Season 9, Episode 1 of “Chopped Junior” titled “Turkey Day! Hooray!” the junior chef was one of only four chosen out of more than 30,000 to compete on the season premiere.

In November 2018, one day out of the blue, Irving went up to her mom Rhonda King and asked her to sign a couple things on a website so she could apply to compete on “Chopped Junior.”

“She came in while I was in bed and said, ‘I want to try out to be on “Chopped Junior”’ and I was half asleep so I was like ‘Yeah, okay’ and just did it,” King said. “Then in April we get a phone call from a casting company saying they were interested in Justice being on the show, and I’m thinking they were full of it, so I went home and turned on “Chopped Junior,” and there it was, the casting company that had called. So I knew it was true.”

“It was really fun and really exciting and I just worked hard to prove that I could cook really well,” Irving said. “I found it online and showed them pictures of what I could cook and just kind of signed up.”

Irving then went through a series of interviews displaying her culinary knowledge. Culinary producers asked her question upon question to prove that Justice was the one cooking, and no one else. Cooking has been her obsession since she has been younger. Watching cooking shows and how-to videos and playing with different recipes filled her brain with extensive knowledge.

“My mom is an amazing chef. She cooks all the time, so when I was really little I would come into the kitchen and I would always ask her if I could stir it because it looked so fun,” Irving said. “Then when I turned 7 that was the first time she let me touch a stove and I learned to cook eggs. I would make eggs every day and I wouldn’t even eat them.”

The call came in the middle of gymnastics that they wanted to invite her to compete on the Thanksgiving-themed show, and thus began her crazy culinary journey.

“Then all the secrecy came in and we couldn’t talk about the show or anything. Everyone knew she tried out for “Chopped Junior” but we were just like: nope, nothing is happening, we’re good,” King said. “So it was weird that we were telling people we were going on a random mystery visit to New York for a week.”

David Dobrik was the guest chef on Irving’s episode and also happens to be Irving’s idol. During the week of filming, Irving became good friends with her fellow contestants, Anna, Jake, and Maya, and is simply thankful for the experience and for the ability to make some new friends.

“I love [David Dobrik] so much, and I’m so happy he was there. It’s like, crazy,” Irving said. “The competitor side of me was strong, but not as much as it usually is because all of us contestants were so close, we just really enjoyed being there and cooking together in general.”

“Justice is absolutely amazing and she never ceases to amaze me,” King said. “I don’t feel old at all and I think that’s because of her. She literally from the summer through the fall plays four different sports and does all of these different things and is on the honor roll. Whatever she decides to do, she does it.”

With a big family including five brothers and sisters who are all involved in different activities, it can be normal that the family doesn’t see each other a lot throughout the day. Cooking changes that.

“One thing about our family is that we are all constantly going in different directions at any given time,” King said. “She’s 10 years younger than her oldest brother so we’re all always kind of doing our own thing, but when we cook, that’s the one thing that keeps us together.”

“Mainly I like cooking just because of the fun of it, and it’s just a type of activity that really keeps me going,” Irving said. “And the mindset of it is just so amazing.”

There’s nothing Irving can’t make, especially when it comes to baking. It’s taken her years to perfect, but Irving’s brownies are among the most famous in her family.

“I used to mix things up and just make brownies all the time and they used to say, ‘you’re wasting ingredients’, because they tasted so bad,” Irving said. “But I learned my own way to make them actually good and now my family loves when I make brownies.”

Irving hopes that maybe some other culinary producer will see the show and that she will have more opportunity to show off her talents. Either way, cooking and baking will always be part of her life.