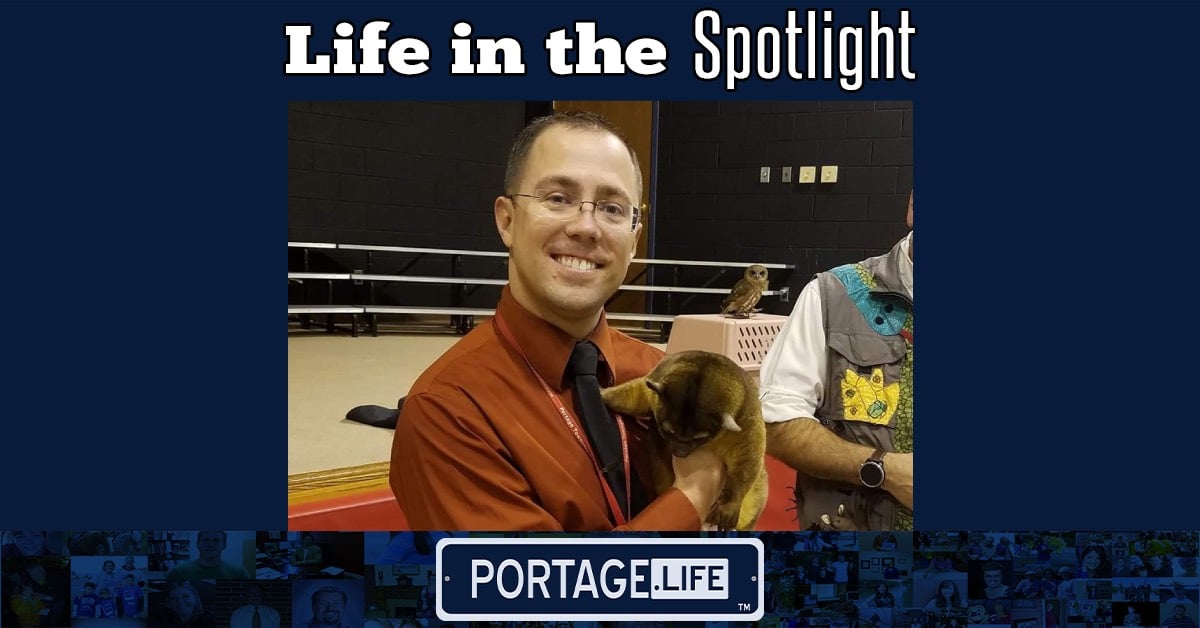 For Jon Evers, Principal of Myers Elementary in Portage, the desire to make an impact in education was almost hereditary as he comes from a family with a strong presence in the classroom.

“I have many family members that are either currently, or were previously, in the field of education,” Evers said. “My grandfather began as a social studies teacher before going back to school to earn a master’s in guidance and administration. He retired as the Principal of River Forrest,” Evers said. “My aunt is an elementary P.E. teacher, and my uncle is a 7th grade science teacher, both here in Portage.”

“My father also began his career as a social studies teacher before going back for his master’s in guidance,” Evers continued. “He retired as the guidance director of a middle school in Florida. My mother worked in the school setting as a secretary and budget keeper but also served an important role as the glue that often kept the building together. As a principal, I know that this could not be more accurate.”

Surrounded by family members in his field, Evers has a plethora of role models who inspire, though his father has been particularly influential.

“Growing up, I used to hear stories of my dad helping kids out in his role as a guidance counselor, but I never really fully understood how impactful he was until I began working in a school,” Evers said. “He made me want to get into education and attempt to replicate some of the great things he has done over the years with his students. My father is the most selfless, hardworking, dedicated man I know. He puts his family first and has always been there for me no matter what. He continues to inspire me to be a great man and, hopefully a father one day, like he is.”

Evers draws inspiration not just from the people around him, but from the school itself. Particularly meaningful for him is the mission statement of Portage Township Schools: educate, empower, and inspire excellence.

“I have this written on the wall in my office and it’s actually one of my favorite quotes,” Evers said. “I think if you can strive to do these three things for someone else you will make a huge impact on not only their lives but your own.”

For Evers, working in the classroom has always been fulfilling, watching his students grow throughout the year. As Principal, he sees that transformation happen for all the classrooms in the school.

“I love seeing all of the kids’ smiling faces and getting to witness first-hand all of the creative and engaging activities and lessons that my teachers provide for their students day in and day out,” Evers said.

On a day outside of school, Evers can usually be found playing a round or two at a local golf course with friends.

“I’ve been golfing for about 10 years, although my score wouldn’t lead you to believe so,” Evers joked. “However, it is relaxing and anytime you can be outside with friends enjoying recreation and comradery it is a good day.”

He also is a lifelong fisherman, a hobby that stems from his Florida roots. A South Florida native, Evers moved to Chesterton at 15, but his love for casting a line followed him from the ocean to Lake Michigan.

“I have been fishing for as long as I can remember. Growing up in Florida, I loved fishing in the canal behind my house, in the ocean, and the Everglades, and now fishing for Perch in Lake Michigan,” Evers said. “You always have a sense of not knowing what might be on the end of your line that makes it exciting. There’s nothing like sitting on a dock with a fishing pole in my hand. I really enjoy the peace, quiet, and being outside.”

Over the years Evers has learned a thing or two about how to keep things on track. While he has acquired many tools in his teacher toolbox, there’s one he encourages those in the educational field to always keep at the ready: adaptability.

“Always be flexible. There is bound to be something that comes up that you weren’t planning for or anticipating, and it is important to make sure you are able to make adjustments on the fly,” Evers said. “We are all human and there are going to be hiccups along the way, so knowing that it is ok if everything doesn’t run perfectly smooth the first time is essential. Just be prepared and learn for the next time.”