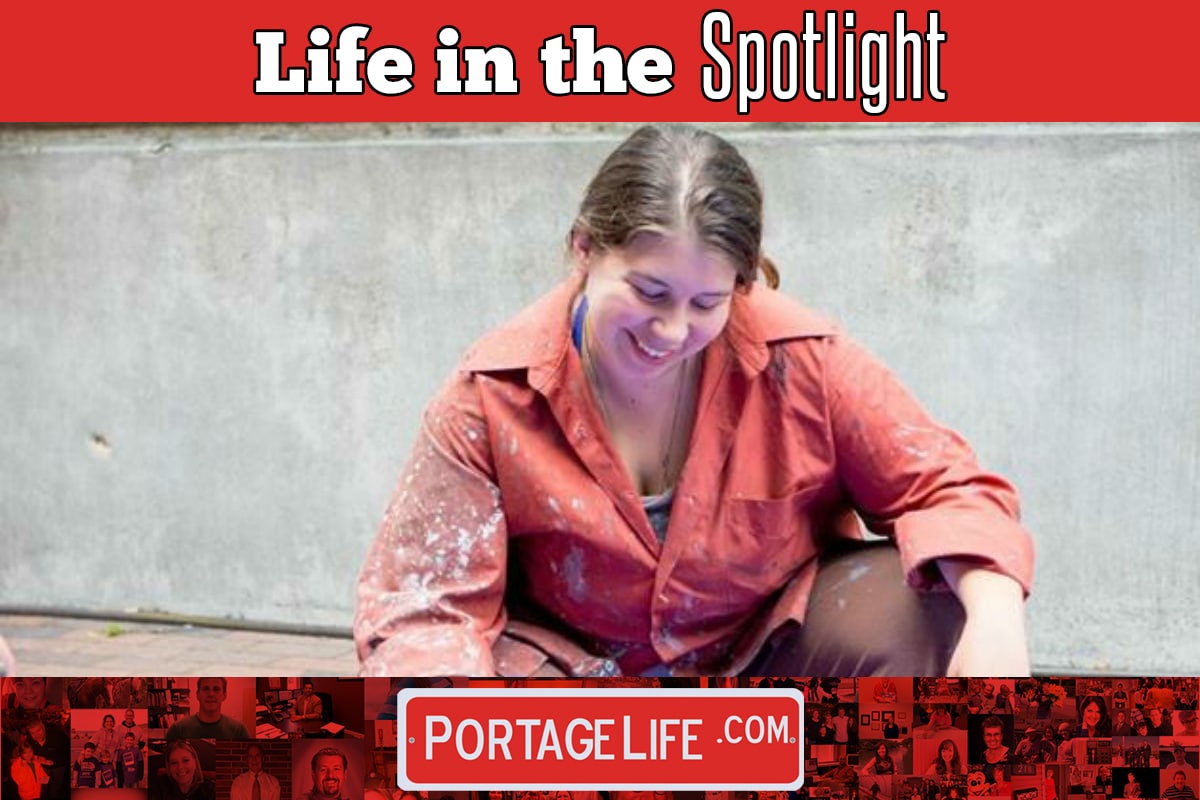 Growing up in Hebron, Jessie Howe loved playing out fiction and fantasy in the country surrounding her rural home. Today, she has turned that into her day job as the Scenic Charge Artist for the Theatre at the Center, building and painting the worlds that play out in countless scenes on the stage.

A career in the arts was always Howe’s goal. After graduating from Hebron High School, she studied fine arts and acting at Columbia College Chicago. When her mother got sick, she pulled out of classes so she could spend more time working various jobs to help with medical bills and her younger siblings’ educations.

“In that time period while I was waiting to be able to go back to school I got really involved with the community theaters around Valpo,” Howe said. “I started painting scenery for shows that I was cast in and I really loved it. I’d always wanted to be involved in art or music, but there was something about the collaborative nature of community theater that helped me find my niche.”

She was most inspired by the people she worked with.

“I’ve met the most incredible, fascinating, and hardworking people,” she said. “So after doing a lot of volunteer work, I decided to take a risk and go back to school. I worked in the area while I was studying at Columbia, and it did take me about five years, but I did finish my degree in theater design with a concentration in scenic design.”

Though she found full-time work and now lives in Portage, Howe still spends a big chuck of her time volunteering at community theaters across the Region, such as Chicago Street Theatre in Valparaiso.

“So many people have helped me along the way through their encouragement,” she said. “They helped me get to a place in my career where I can give back. It’s a beautiful cycle the way it’s worked out.”

Howe loves just about everything involved with theater, but a few aspects of a production do stand out to her.

“There’s something about theater where there really is a way for anybody to get involved,” she said. “Even if you’re not comfortable with getting on stage, it’s that act of creative problem solving and working with other people that brings everyone together and lets them have a voice to express themselves.”

Howe’s message for anyone interested in the finding work in the arts:

“I believe that we all have that spark, that drive to create and tell a story somewhere inside,” Howe said. “You can hone and develop any talent, it just takes hard work and perseverance. You just need to have that drive and belief in yourself. That comes from the experiences I’ve had with the people who’ve encouraged me and set incredible examples. It’s helped me overcome a lot of adversity.”

Howe makes music and hikes in her spare time, and loves traveling with her boyfriend Brian, whom she credits as her greatest supporter.