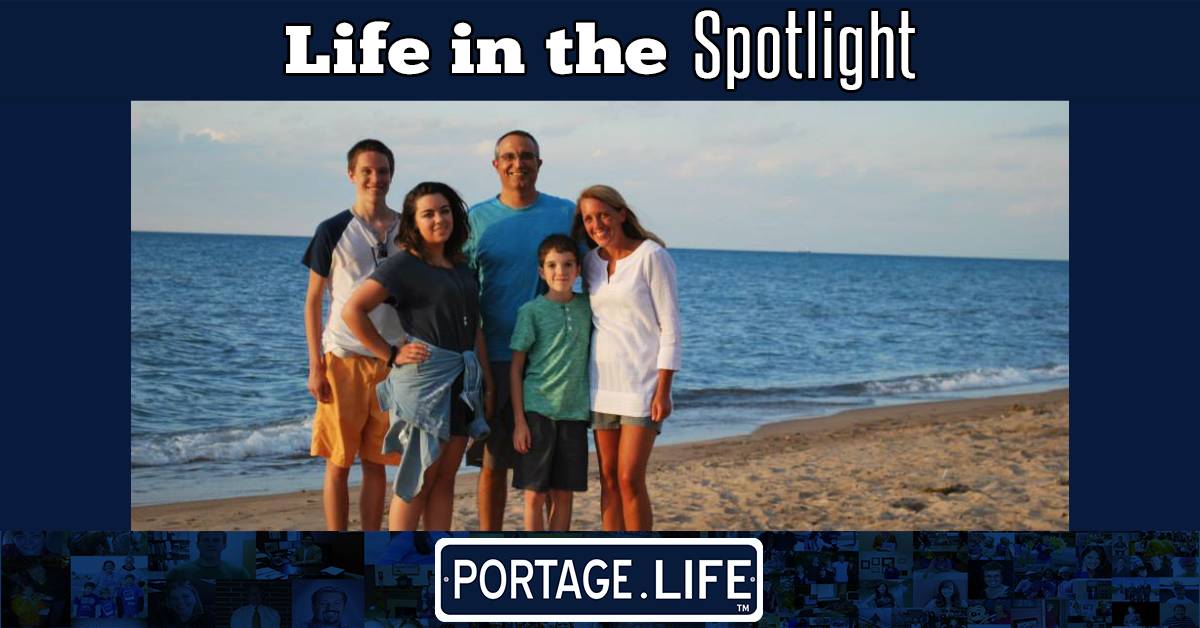 With the passion that 7th grade mathematics teacher Jeffrey Smenyak radiates for his students, it’s hard to believe that education wasn’t always his career of choice. Smenyak was originally to major in in Actuarial Science at Butler University, but after participating in an internship for an Indianapolis insurance company, he decided to shift paths.

“The stress of that work environment was not for me, but I knew I wanted to use my love for math in some way, and always thought it would be intriguing to teach,” Smenyak said. “So, I decided to change my major to Mathematics with a minor in Education. The rest is history!”

Smenyak said the best part of his job is the students he is privileged to work with every day at Fegely Middle School in Portage.

“There is never a dull moment in a middle school classroom, and I appreciate the fact that, for a short time, our lives cross,” Smenyak said. “I remember being their age and it isn't easy. It is my hope that I can bring some sort of positivity to their young lives.”

Smenyak attended Fegely as a middle schooler himself, which has allowed him to rekindle connections with past teachers in a whole new light.

“When I first began teaching here, many of my former teachers were still here as colleagues,” Smenyak said. “As the years have passed, there are only a couple of them left, but it still feels so cool to be teaching alongside those who once taught me.”

Throughout his life, Smenyak has had many influential mentors, but two stand out among the rest: his parents, David and Nancy Smenyak.

“I’ve looked up to them my entire life. They just did the parenting thing so right, balancing just enough freedom with the right amount of discipline,” Smenyak said. “Beyond that, they are sincerely two of my best friends. I love them with all my heart.”

“Bill taught me more about myself than anyone else,” Smenyak said. “I looked up to him as my teacher and coach, and I am proud to still call him a good friend. He is a major reason I wanted to teach and coach myself, and why I wanted to give back to the community that had served me so well.”

When he’s not changing lives in the classroom, Smenyak loves vacationing with his family, and always looks forward to the adventures they share.

“My wife Sarah and I have tried to allow our kids to experience as much as possible,” Smenyak said. “Last summer, we made a trek out east. We took the kids to Gettysburg, something I really enjoyed, being a huge Civil War buff. We also visited Shenandoah National Park, Philadelphia, Boston, New York City, and Acadia National Park. What a great trip it was!”

Smenyak strives to be a force for good in the world.

“This ‘Golden Rule’ from the Bible is just so appropriate and meaningful to me,” Smenyak said. “It is also a sadly forgotten concept in society today, so I try to bring it to life through my own daily actions.”

This outlook is something Smenyak has passed on to his three children: Cassidy, who is due to get married this June, Andrew, a Computer Engineering major at Purdue University West Lafayette, and Conner, a freshman at Chesterton High School and incredibly talented piano player and artist.

“We also have three furry pals: a golden retriever named Lincoln and two cats named Morgan and Redd. All of them bring us a great amount of joy and laughter, even the kids,” Smenyak joked. “My favorite place to be is wherever my family and friends are gathered.”

Smenyak also enjoys connecting with nature and spending time in the great outdoors, especially when he can do it with his family.

“Sarah and I have a love for the outdoors,” Smenyak said. “We've been to about half of our nation's National Parks now. Each experience has renewed our outlook and appreciation for life.”

This year, that love for nature will be experienced in a very special way. Smenyak was a 2020 Lilly Endowment Grant recipient. As part of the Endowment’s Teacher Creativity Fellowship Program, he will connect with the land and environment of Alaska by visiting all eight Alaskan national parks and participate in activities that connect the parks with local history and culture. Sarah, a counselor at Liberty Intermediate School in Chesterton, also received the grant, allowing the couple to enjoy this incredible experience together.

“It means a lot to have received this, and I’m so thankful Sarah will be joining me,” Smenyak said. “She is an incredible planner, and is currently putting together a detailed itinerary for our trip.”

Smenyak embraces all that a life in teaching has to offer, and will no doubt return from his travels renewed and inspired, ready to continue impacting students’ lives for the better. He encourages future educators to do the same, and to hang in there when the road gets rough.

“Rely on your colleagues to help you through the tough days because we all have them,” Smenyak said. “Our profession is such a difficult one, but it is also such an important one.”