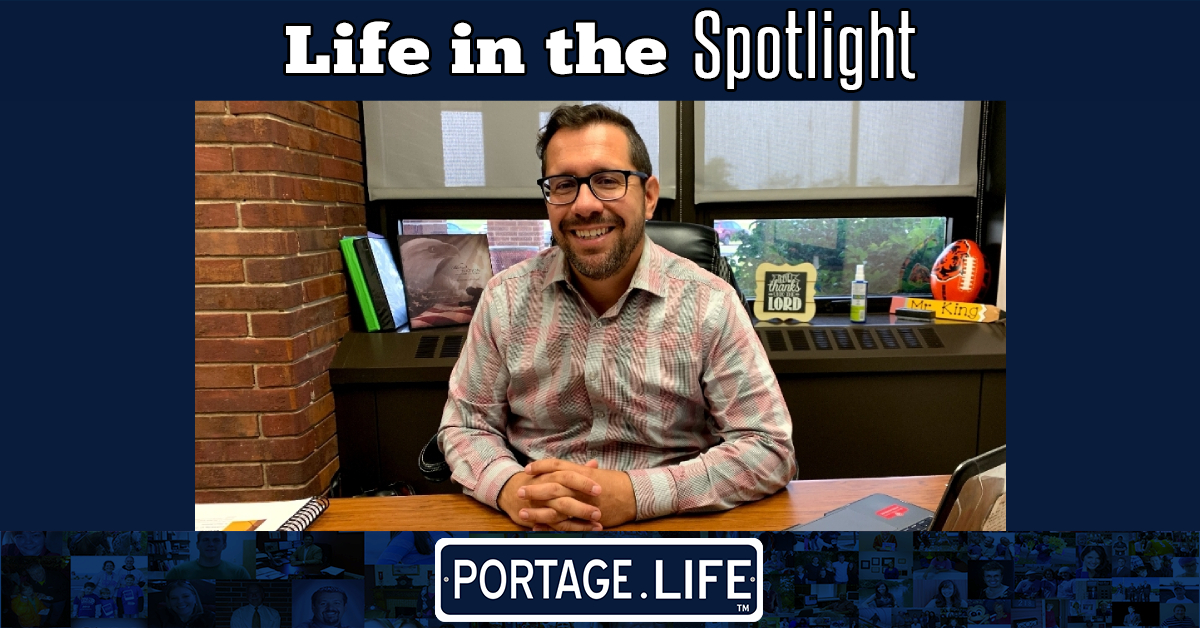 Working in a school district is not easy, especially with the future looking uncertain due to COVID-19. But someone as charismatic and determined as Jeff King is perfect for the job. Starting his career as an elementary school teacher, King is currently the Assistant Principal of Portage High School and absolutely loves what he does.

“I’ve always felt a call to reach out and help people,” King said. “My family and my faith raised me in a way that believes a good life that’s lived is one where you’re always trying to help others and add value to people’s lives. Ultimately, education was the field I resonated with the most, so I pursued teaching and later school administration.”

King graduated from college in 2000 and got his first teaching opportunity at Salem Elementary School in Portage. In the summer of 2006, he was offered a chance to be a principal at Myers Elementary School, also in Portage. Roughly a decade later, King was asked to serve as principal at Aylesworth Elementary for three years, and then he was assigned to Portage High School as its Assistant Principal.

“As a teacher, I had the opportunity to cultivate and influence 20 to 30 students every year, but as a principal, that number becomes exponentially more,” King said. “Now I have the chance to affect the lives of roughly 2,600 students.”

King further stated that he starts out his day bright and early with an optimistic mindset, and he hopes to affect as many peoples’ lives as possible.

“My goal is that I make the day of every person I interact with just a little bit better with my words and actions, whether it be my daily run to McDonald’s or talking with a teacher here at the school,” King said. “No matter what it is that they need or want, I want to be the person that is determined to make peoples’ lives a little better.”

Furthermore, King states that at the end of every day, he reflects on what the day has brought to him, and tries to adjust to make himself a better version of himself. King states that there is always value to having meaningful conversations with others, learning new things from different people, and further opening your mind.

“I feel humbled by the fact that I have the chance to touch so many people's lives,” King said. “I can take what I learned and share it with others so that I can help their lives as well. The key to a good life is to simply work hard, be kind, and remain hopeful.”