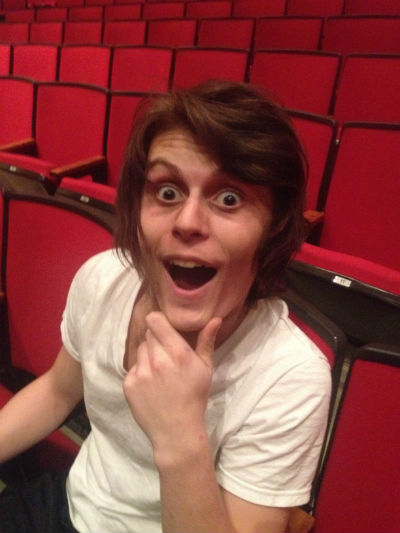 This week's Portage Life in the Spotlight is no stranger to finding himself in the spotlight.

Junior Hunter Martinko spends his time helping out the Portage High School thespian branch as treasurer for the group along with appearing on stage in their performances.

The atmosphere, Martinko feels, is more positive than other after school activities he could have chosen instead.

“[In] theater, you work with people you don’t know to create something bigger than yourself, and it’s usually more beautiful than anything any one person could have done alone because it takes everyone to make it happen,” Martinko said.

Most recently, Martinko landed the lead role of John Proctor in this weekend’s performance of The Crucible, which follows the story of Proctor as he tries to deter the hangings of the 1692 Salem witch trials.

“I like when it’s placed,” Martinko said. “If I could go back to any point in time, it would probably be around then, because the language is awesome.”

Although it is set over 300 years ago, many of the issues presented in the Crucible translate to emotional situations still faced today. As Proctor, Martinko plays a man trying to keep his own sense of morality as he watches those around him give in to fear.

Even with similarities, there are also many differences between Martinko and Proctor. As an actor, Martinko has found he must disconnect from himself before becoming totally immersed in acting.

“For me, I have to sit there and think about everything that happened that day and let go of Hunter Martinko and slowly and piece-by-piece become John Proctor,” Martinko said.

Letting himself go is key for Martinko to get in character and really work up to the emotional character of John Proctor. He believes this is the most difficult, but also most important, part of acting.

Since this show marks Martinko's first lead, he has found out just what it takes as both an actor and a human being to take on such a responsibility.

“I’ve learned a lot, from this show alone, about acting, about focusing as a human being, about getting into character, about communicating and about life," Martinko said. "[I’ve learned] how to make it to the final outcome.”

He believes that actors must be able to "get yelled at and be able to take it as constructive criticism, even though you are actually getting yelled at. That’s something that’s very important for everybody."

With all the hard work and dedication he has put in to this part, Martinko said he is very excited to perform in The Crucible, which will take place in Portage High School’s East Auditorium on Friday Nov. 22 and Saturday Nov. 23 at 7:30 p.m. and Sunday Nov. 24 at 2:30 p.m.

"I pray to God I remember my lines," Martinko laughed.

Between theatre shows, Martinko spends his time singing as well as playing guitar and piano.

“Music is my number one, before theatre," Marinko admitted.

He hopes to go to college and double major in music and theatre.

“That’s really the only two things I could ever see myself doing and being happy and making money at,” Martinko said.