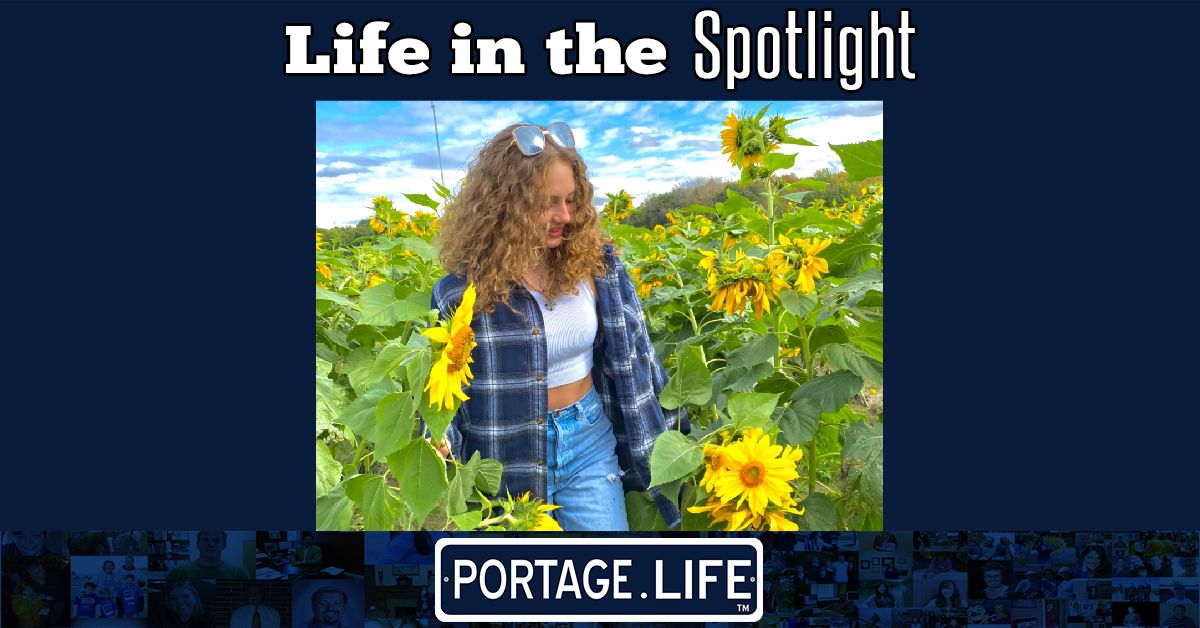 Portage High School senior Alexandria (Lexi) Cline has never given up on anything, especially when it comes to volleyball. Following in the footsteps of her older sister, Cline has become one of the most recognized volleyball players in the Region.

“My older sister started in seventh grade.” said Cline, “and I started when I got to seventh grade. Right after that first season in middle school, I started playing club and haven't stopped since.”

For Cline, volleyball isn’t just an extracurricular activity. It’s a way for her to connect with the people of her hometown.

“I definitely found most of my friends through volleyball,” she said. “Knowing that you're in the same position as someone else with school and life, being able to connect and get to know people, I feel like that's how I know people from Portage. I like seeing them after school everyday in season.”

Cline has been playing varsity for Portage since her freshman year of high school. In that time, she has built a sense of trust between herself and the other players. Between her skill and her connection with the team, her teammates elected her as the team captain this year, which was the first time the team has ever voted for their captain.

“I've been captain every year, but it's never been a team pick before. I thought it was cool that I was picked by my team,” Cline said.

It hasn’t always been easy or fun for Cline. She suffered a shoulder injury related to vaccine administration (SIRVA) last year that kept her away from the court for a few months, but Cline recounts her first big setback as the most harrowing she’s faced.

“In eighth grade, I tore my meniscus and had to have surgery. It took me a full year to get back into playing. I had to relearn how to walk, and right after being able to figure that out, my sesamoids froze from being inactive. I had to wear a boot right after. That didn't help because my knee could have healed weird,” said Cline.

Despite sustaining an injury that has ended the career of many athletes, Cline stayed determined to get back on the court thanks to the support of her family and teammates.

“The recovery process was long, but I'm happy for the coaches that I had, and my teammates were awesome,” Cline said. “I'm so happy that I had that team and could confide in them. My family also helped me out the most throughout that whole process with physical therapy. My mom was my biggest supporter; I can confide in her with everything. I don't know what I would have done without her.”

While having to take time off physically, Cline kept herself close to the court and found herself enjoying being on the sideline. It helped to watch how her team all worked together.

“It was awesome for me to sit out because I feel like it helped me gain volleyball IQ. I felt like it was a blessing in disguise,” said Cline.

Outside of volleyball, Cline likes to spend time with her family, make jewelry, and redecorate her space. She also enjoys talking to people in her community. Cline says that she tries to make every conversation she has meaningful.

“When I talk to someone, it's not like small talk. I'm getting to know that person,” said Cline. “I try to get something from each person and take that into my life.”

Being able to connect meaningfully with her community is something that inspires Cline to do her best on the court. Cline has committed to beginning her college season with the University of Wisconsin-Oshkosh. She’ll be studying kinesiology and exercise science to one day become an athletic trainer.

Cline hopes that everyone can pursue their passions like she has. She encourages everyone to persevere in hardship.

“Your troubles aren’t going to leave you if you quit,” said Cline. “You're going to have that problem wherever you go, so stick it out and try to learn from each experience so you can develop as a person.”