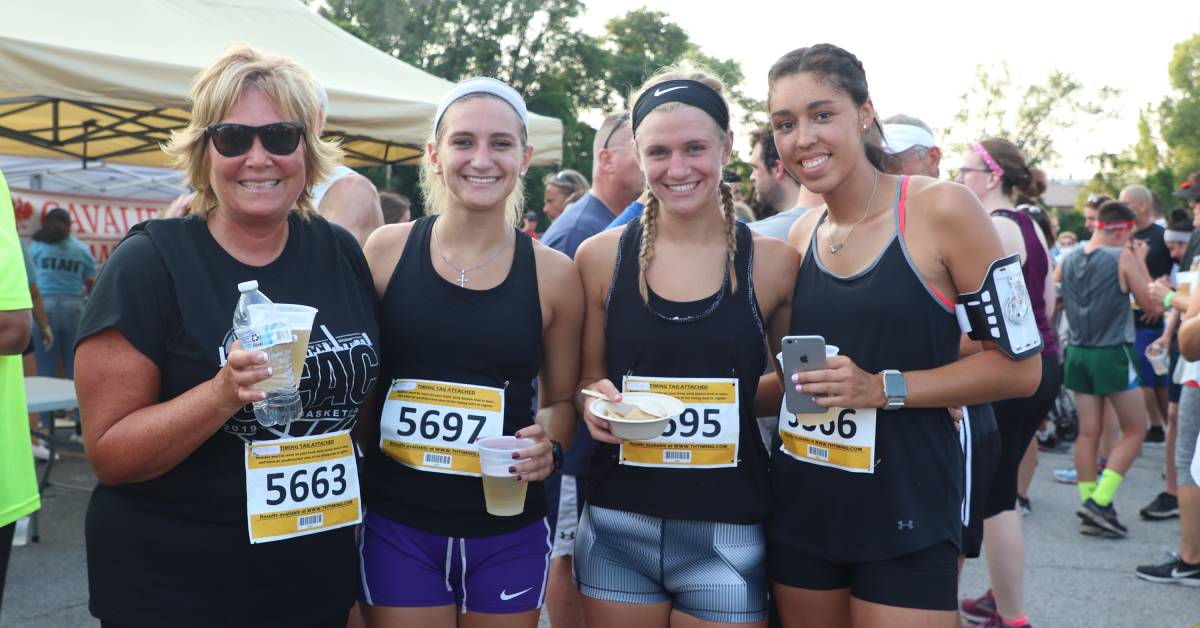 “The Pierogi Stumble started four years ago as a means to bring awareness to the college,” said Rick Torres, CCSJ Athletic Director and the brains behind the race. “There are a lot of folks that still don’t know about Calumet College, and we wanted to bring people on campus that may not have never been here before.”

Growing from 92 entrees to more than 400 runners in just four years, the Stumble has continued to attract more and more individuals to the CCSJ campus each year. The race has truly become a staple in Pierogi Fest tradition, and many runners have made it an annual must-do on their summer bucket list. Deonta Pittman, CCSJ alum and winner of the 19-24 age group, runs the race every year.

“I came out here to improve on my time from last year, but also because CCSJ is like home for me,” Pittman said. “It’s so great to come here and see old and new faces. This race brings so many people together, and that’s a really great thing; there’s nothing like a good race!”

Fran Drozdz, 1967 graduate of CCSJ, came all the way from Arizona to participate, and earned the number one stop in her age group. Drozdz has run a marathon in all 50 states plus Washington D.C., and is working on completing one in all of the continents.

“As an avid athlete myself, I am so excited that this race supports Calumet College Athletics,” Drozdz said. “As soon as President Amy McCormack asked us to come out, I rounded up the posse and said, ‘Let’s do it!’”

Though this was her first time running the Pierogi Stumble, Drozdz said it was a great experience she’ll never forget.

“My husband is Polish, and I was born and raised here in Whiting, so it’s really exciting for us to be here,” Drozdz said.

Hundreds of athletes laced up their shoes and took to the course, but East Chicago Central High School student Gerardo Abonce emerged on top as the overall race winner with a 5k time of 17:20.8.

“It was pretty cool to come in First Place, I did not expect it at all,” Abonce said. “This was my first time running this race, but I really enjoyed it—I’ll definitely be coming back next year!”

This year’s race in particular was one for the books, as CCSJ unveiled Crimson Joe, the first official school mascot in the college’s history. Sporting a crimson and gray suit, a wave of crimson hair, and signature trident in hand, Crimson Joe brought a new level of energy to the race.

“It was so fun having Crimson Joe waiting at the finish,” said participant Harley Sutton. “He really gave you that extra boost of energy you need to finish strong!”

The Pierogi Stumble has grown in both participation and overall experience, adding perks such as Adidas gifts for early registrants, prizes for each age group winners, and a plethora of pierogis and beer waiting for runners at the finish line.

“After the first year, I asked the crowd what they wanted to see to enhance the race experience—they all said pierogis,” Torres said. “So, the second year we solicited some sponsors and were able to get 800 pierogis and a keg of beer from Bulldog Brewing Company. It was a hit, and we quickly ran out of everything!”

With its ever-increasing success, the Pierogi Stumble is now bringing more than just awareness to CCSJ.

“We’re in a position now where we can start looking at this as a true fundraiser for Crimson Wave Athletics,” Torres said. “We raised money last year and were able to do some great things here at the college. We added batting cages, three new treadmills, an extra exercise room, and new storage units for coaches.”

Anticipation for this race increases each year, and the 2019 Pierogi 5k Stumble did not disappoint. Every runner walked away with tired legs but overflowing hearts and full stomachs, ready to continue the festivities throughout the rest of the weekend!