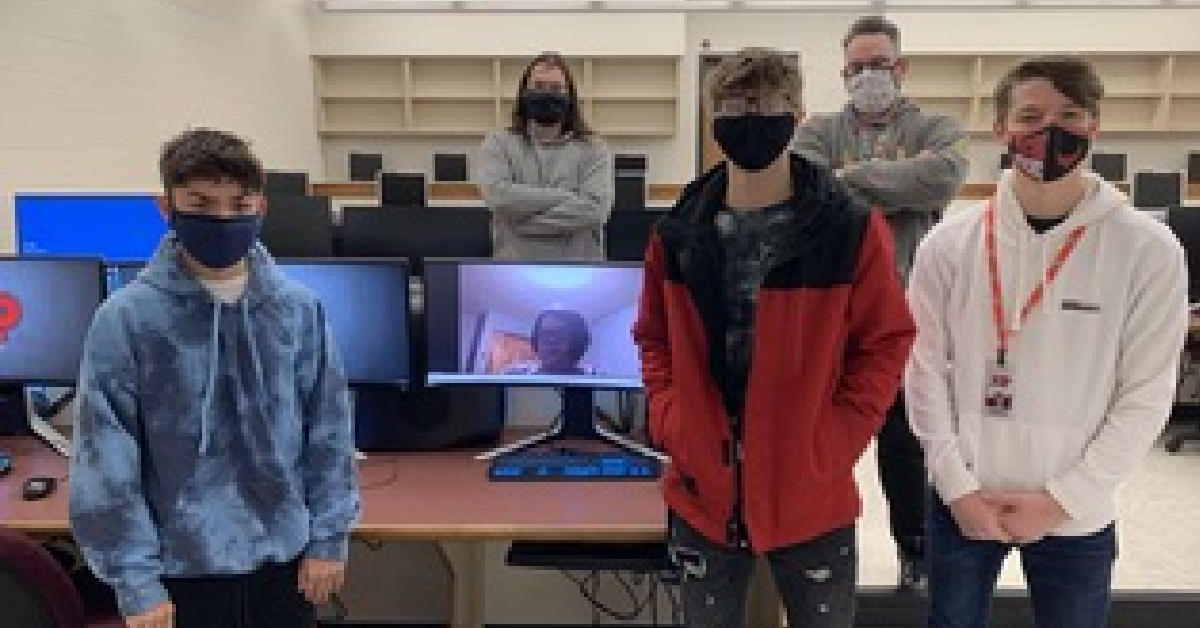 The match was held via Twitch live stream, where the players competed in Rocket League, a vehicular soccer video game developed and published by Psyonix.

While Portage's Team Red lost with a score of 3-1 in the best of five series against Carmel High School, they were ecstatic about their overall success this season.

Team Red members include Cristian Maldonado, Carter Ostrander, Dakoda Wagner, and Tristan Wilkie. Their coaches, Nicholas Politano and Nate Thompson, credit their high level of skill and collaboration as a team to their success this season. Politano and Thompson were also impressed by the other team, Team White, whose amount of progress grew significantly as they learned the value of collaboration.

“The highlight of the season has been witnessing the growth in our teams, both in ability and camaraderie,” Nicholas Politano said. “We are incredibly proud of how far they've come and the improvements they have made in teamwork and skill. We saw them become tenacious to improve, eager to get to the next match and demonstrate the sum of their efforts so far.”

Since the Esports team is a new addition to the programs at Portage High School, they have faced some concerns about the culture of the program.

“We know the culture around Esports is different from other sports, so it's been an uphill battle. We recognize that Esports is new and as a result, we are working to expand the program, offerings, and collaborations,” Politano said. “However, we want people to be aware that we're not just about playing games. Esports is about playing responsibly, improving yourself, and being part of something awesome.”

Determined to increase the number of members in the program, the Esport team hopes to expand their horizons with more offered opportunities for students.

“So far, we have some ideas for how next year is going to look in terms of classes offered and courses that align with Esports in the Career and Technical Education (CTE) area,” Politano said. “Hopefully by next year, we won't need to worry about COVID-19 restrictions and can have our meets in person, which will let us show off our high-end equipment as well as work on a casting booth for our matches. This year has already been a fantastic proof-of-concept, but next year we can really take the pedal-to-the-metal and demonstrate our ambitions for Esports at Portage.”

The team is looking forward to seeing what they can accomplish both this semester and next year. PHS students who are interested in joining the Portage Esports team should watch out for future call-out meetings from Politano and Thompson.

Heldt was first introduced to Distinguished Young Women her freshman year when some members of her dance team were participating in the program. After learning more about the program from her teammates, Heldt was very interested in participating.

Although the setting for the program has changed due to COVID precautions, Heldt remains grateful for the opportunity to compete.

“I've gained many public speaking and interview skills that will be very useful in my future career from this program. Distinguished Young Women has also helped me become a more well-rounded individual and express myself professionally,” Heldt said. “At the state competition, I look forward to meeting all of the other Distinguished Young Women and seeing what talents they perform.”

While Heldt is undecided as to where she will attend college in the fall, she hopes to study pharmacy.

“I plan to attend either Purdue or Butler University in the fall of 2021 to study pharmacy,” Heldt said. “I am interested in both colleges because they have great pharmacy programs and strong graduate programs. Regardless of where my journey begins, I am excited to see where my life will take me.”