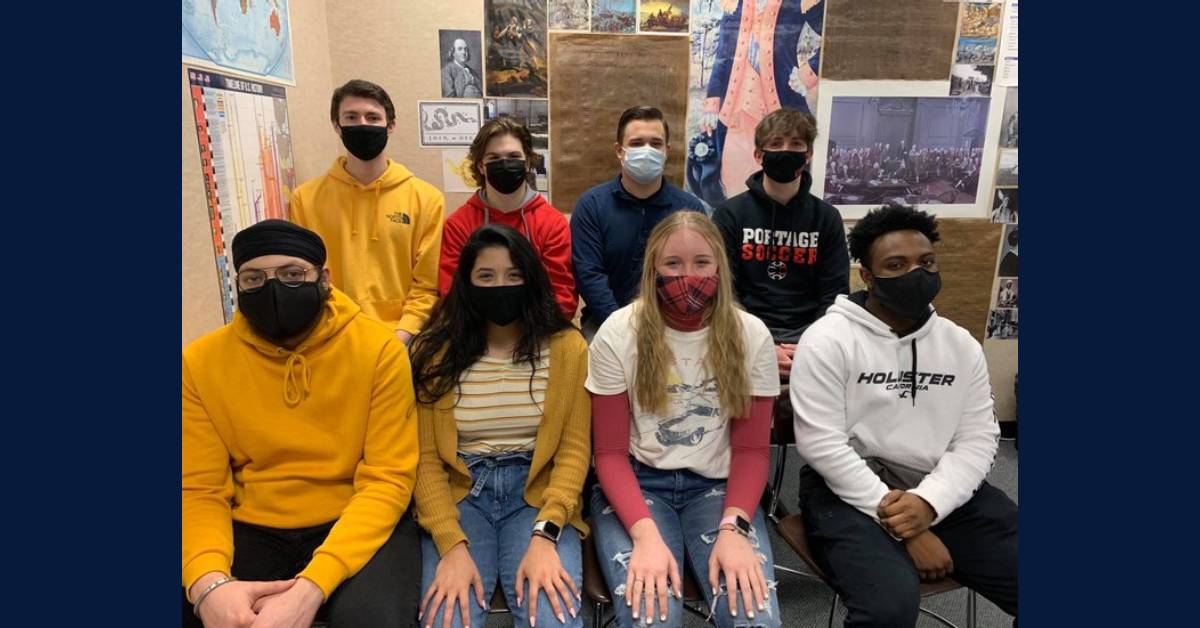 For the second year in a row, Portage High School (PHS)’s Quiz Bowl team has qualified for state finals, which will be held virtually on March 6.

Nye was pleased with the amount of progress the team made throughout the year.

“I was so impressed by how much they knew; the students would buzz in with answers so quickly, it amazed me,” Nye said. “We answered a couple of literature questions correctly at the area competition, which is kind of a big deal considering that art and literature are our weak spots.”

Although the team finished their regular season with a record of 3-6, Goffette is proud of his team’s achievements.

“This year has been a little bit of a roller coaster, but our team has managed to do extremely well,” Goffette said. “Even though we lost, the highlight of the season was the semifinal game of our regional tournament. The other team got the last question correct and sent the match into overtime which consisted of three questions. The opposing team got the first overtime point, but we came right back getting the second overtime point. It all came down to the very last overtime question which they ended up getting correct by buzzing in about half a second faster than our team. It hurt to lose, but it was a fun experience.”

Goffette is thankful for the team’s willingness to contribute in their own unique ways.

“With the team specializing in certain areas, each member added something that increased our odds of getting more questions correct,” he said. “One thing that I’ve learned from being on this team is to be confident and never be afraid to answer. It is better to try and be wrong than to not try at all; oftentimes you might surprise yourself.”

Since the entire varsity team is graduating in June, Nye looks forward to the junior varsity members moving up.

“Considering all things, it was nice working alongside the students this year. I can’t wait to see what next year holds for us; hopefully, the seniors can pass on their knowledge of politics in geology,” Nye said.

The Portage High School Interact Club members created Valentine's Day cards for the residents of Miller's Merry Manor. The in-person and virtual members of the group created three or more cards each and delivered them during Presidents’ Day weekend.

Students in Jacqueline Brasseur's Project Lead the Way’s Principles of Biomedical Science class at PHS have been learning about the documentation of patient data and medical history. They have learned how to collect and analyze vital signs, draw blood, and interpret the results of routine blood work. They used model phlebotomy arms to practice drawing blood.

Two of the PHS Porta-Botz teams have qualified for the State meet. Teams Apex and Karma won the Rosewood division and earned spots at State.

PHS’s annual spring musical is approaching. Based on Charles Schulz’s comic strip, the musical will be “You’re a Good Man, Charlie Brown.” With charm, wit and heart, the musical aims to explore life through the eyes of Charlie Brown and his friends in the Peanuts gang.

Being mindful of COVID-19 restrictions, the PHS Thespians are offering a virtual, pre-recorded version of the musical for the community. However, they are hoping they will be able to have an in-person audience.

“The spring musical will be hosted on April 23 and April 24 at 7 p.m. in the east auditorium, but if we have to go completely virtual, then the musical will be available the following week kicking off with April 25 and going until May 1 at 2 p.m. and ending at 10 p.m.,” PHS Theater Director Mahaffa Thompson said. “I just hope we can give our students a taste of normalcy by having an audience in the house.”

With the cast being shortened to six people, the limitation was the biggest inspiration for the musical.

“I normally love to do giant productions with as many people on stage as possible. However, COVID-19 makes everything different,” Thompson said. “A small cast means we have the best of the best while the production value will be high with many students working backstage as techies or designers.”