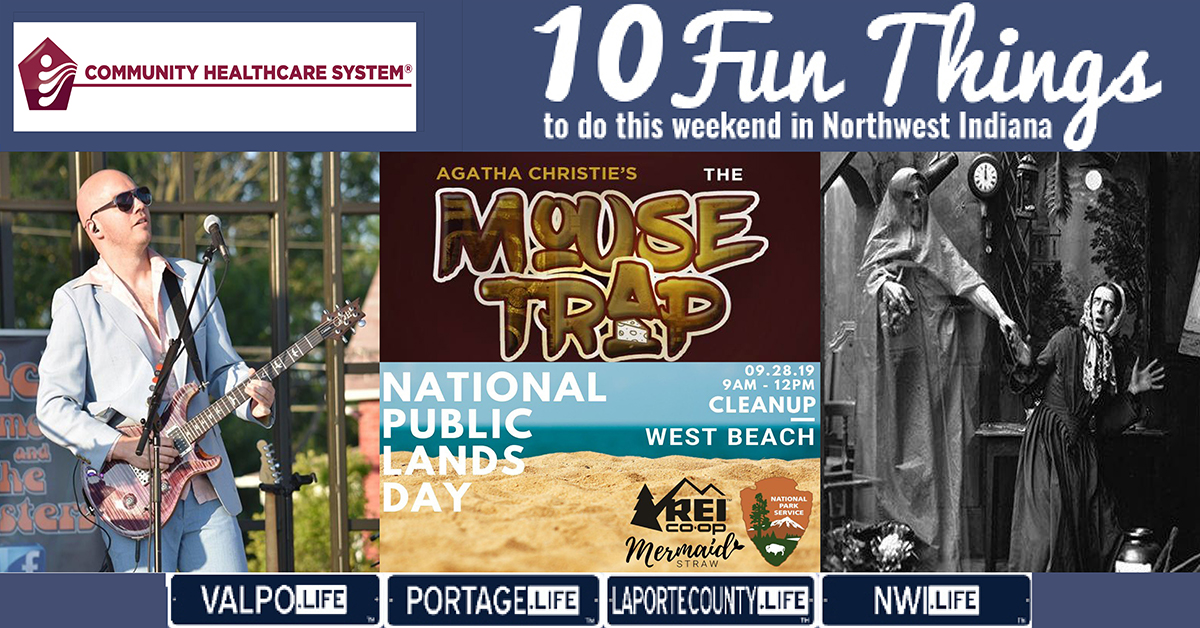 The Region is in for an action-packed weekend! From haunted pub crawls to music concerts, NWI is filled with adventure this weekend.

THE HAUNTED PUB CRAWL OF VALPO

Haunted Pub Crawl of downtown Valparaiso, September 27th at 7:30 PM. More dates coming soon! Who's ready for some ghosts and some Boos? Our tour guide for the night is Tonya! The tour is roughly 2.5 hours long and is all walking (or crawling) and no bus. The tour will visit different locations than our normal Haunted Pub Crawl and we will explore more of the Valparaiso City History as a part of this tour!

A group of strangers is stranded in a boarding house during a snowstorm, on of whom is a murderer. The suspects include the newly married couple who run the house, and the suspicions in their minds nearly wreck their perfect marriage. Others are a spinster with a curious background, an architect who seems better equipped to be a chef, a retired Army major, a strange little man who claims his car has overturned in a drift, and a lawyer who makes life miserable for everyone. Into their midst comes a policeman, traveling on skis. He no sooner arrives when the lawyer is killed. Two down, and one to go. To get to the rationale of the murderer's pattern, the policeman probes the background of everyone present and rattles a lot of skeletons. Another famous Agatha Christie twist finish! Chalk up another superb intrigue for the foremost mystery writer of her time.

Indiana Dunes National Park is hosting a park clean-up for National Public Lands Day on Saturday, September 28, from 9:00 am to 12:00 pm at West Beach. Join park staff, Mermaid Straw, REI, and Imperfect Produce for a day of stewardship focused around reducing single-use plastic waste. This event is an extension of Trash Trekkers, a drop-in trash collection program in the park.

MAKE IT & TAKE IT

Make it and take it! The MHOF's September craft is a colorful fall wreath that children can make and take home to enjoy!

Hometown Heroes Committee looks for organizations that were founded locally by hard-working men and women that directly assist the community in which they live (i.e Lake County preferably). The main focus of these organizations needs to be on helping Law Enforcement, Fire/EMT, and Active or Retired Military.

DICK DIAMOND AND THE DUSTERS AT BLUE CHIP CASINO

Dick Diamond and the Dusters is performing at Blue Chip Casino on Saturday, September 28!

A film by James Franco, based on the book by Steve Erickson. Starring James Franco, Megan Fox, Joey King, Jacki Weaver, Danny McBride, Craig Robinson, and Seth Rogan. Ike Jerome, a 24-year-old architecture student inspired by the few films he has seen, rides the bus into Hollywood. Jerome is almost autistic (later, his friend dubs him a “cineautistic”) in his interactions with the world. With a tattoo of Montgomery Clift and Elizabeth Taylor as they appear in A Place in the Sun on his shaved head, he makes an impression on the people around him. Soon breaking into film as a designer and eventually, a film editor, Vikar (as he is nicknamed) begins a dreamlike journey into the world of films that eventually ends in tragedy and almost horrific discovery.

Join us every Sunday in September from 5-7pm for live music. Let's make the most of these final days of summer!

In this fun program, you will get to dispel some myths about our only flying mammal. Join us in the Nature Center auditorium for a program and easy hike to see bats flying out for their nightly insect meals!

The 4th Annual Bri's Race, 5K Competitive Run and 1 Mile Fun Walk, in memory of Brianna Hefner who was shot and killed by her husband in 2015, will be held at Gabis Arboretum at PNW (formerly known as Taltree Arboretum), Valparaiso IN on Saturday September 28, 2019.